Bali is one of 17,000 islands (6,000 inhabited) in the archipelago that make up the country of Indonesia. It is just 90 miles (145 km) long and 50 miles (80 km) wide, and can easily be driven across in a day. The island is just east of the island of Java and west of Lombok in the Indian Ocean. It sits approximately 8° below the equator, making it a part of the Southern Hemisphere.

Bali is an Indonesian province, which means that it has its own provincial government and local customs. It is in the southernmost part of the country, and is located close to the northern tip of Australia. The nearest country to the east is Papua New Guinea; Malaysia sits to the north and northwest. Traveling straight north, past the other Indonesian provinces of South, Central, West, and East Kalimantan, is the South China Sea, home to Vietnam and the Philippines. Bali sits about 3,356 miles (5,400 km) south of Beijing.

The climate on the island is usually described as tropical — the weather is warm throughout most of the year, though there are defined wet and dry seasons. The near-consistent temperatures make the island an ideal place for growing citrus fruits, rice, and coffee beans. Most residents work in agriculture.

Is Amazon actually giving you a competitive price? This little known plugin reveals the answer.

Although many of the islands that make up Indonesia are beautiful and appealing, this one is often considered particularly attractive. Much of the island is surrounded by beaches with clear water, and coral reefs are common. Mount Agung, an active volcano, towers 10,308 feet (3,142 meters) above the terrain in the center of the island. The inland is dense with green rice paddies.

Indonesia’s total population is about 231 million, about 3 million of whom are Balinese. Most people who live in Indonesia are Muslim, but a majority of those on Bali practice the Hindu faith. In fact, it's home to most of Indonesia’s Hindu minority. The island is something of a mixture of the two worlds, as there is a great Islamic influence alongside a strong Hindu pull.

The island also has a fascinating cultural tradition. Ubud, in the center of the island, is known for arts and crafts, including woodcarving, batik-making, and painting. Balinese dance and Gamelan orchestra performances are common. Small artistic touches can often be seen in the form of small offerings presented to Hindu gods.

The island is a very popular tourist destination, and tourism makes up a significant part of the economy. Terrorist attacks in 2002 and 2005 caused a serious drop in the number of visitors to the island, however, although the industry is improving. The popular 2010 film adaptation of the novel Eat, Pray, Love was shot in part in Bali, which many believe reinvigorated tourism, at least among people coming from North American and European countries. 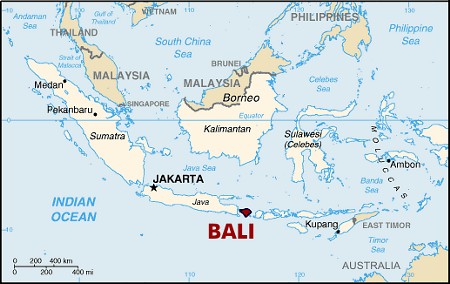 i really want to go Bali. It seems like a very beautiful place to visit and the beaches and islands are attractive.

I to just watched the movie "Eat Pray Love." And I fell in love with Bali even more than the first time that I learned about it. I've been a lost soul for most my life and I know I will go there one day even if it's in my dreams.

I went to Bali last year and the local people were really friendly and I went there straight after my vietnam holidays.

Bali really is very beautiful and also still seems to attract a lot of visitors.

Wasn't Bali the place where the movie South Pacific was filmed? I thought Bali was in the South Pacific islands near Tahiti. Guess I was wrong. The scenery there is magnificent. Would like to go there some day.

After watching "Eat, Pray, Love" i knew i wanted to go to Bali, and amazingly, I've been working with someone from Bali and I didn't know until after I watched the movie. So i have an invite, next year I'm off to this beautiful island.

i have never been there, but hope to do so.

my best friend is in bali and now I've started thinking to visit this heaven. that place sounds interesting.

i just saw the eat pray love movie and fell in love with the beauty of Bali. would love to go there one day.

After Eat Pray Love, I had to look up where Bali was. I love tropical places and it's another place on my Bucket List now! --"L"

Saw "Eat, Pray, Love" with my friend, great movie! Julia Roberts did a fantastic job, and would I ever love to go to Bali! It is a treasure for sure.

I have been there, it is such a wonderful place. it seems a bit though. But it was one of the best holidays ever. My sister got married there in a beautiful, temple place.

I really want to go to Bali! The weather, the climate, the scenery, the batik, the people... it all sounds so wonderful!